Continuing the discussion from PLIX Spatial Poetry: Reflections from the Beta-Testing Process

This morning I wanted to spend a little time on figuring out how I would offer this experience for adult patrons over summer.

I started out on Google Maps and realized how challenging the maps can be with all the pins highlighting businesses. 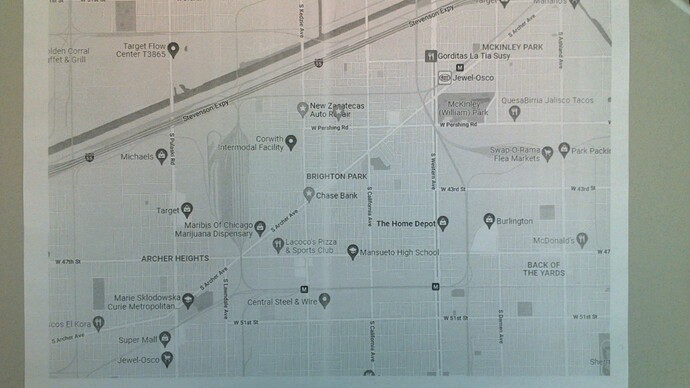 01 google map of location2592×1458 414 KB
I did find it interesting to pull sounds of the businesses, but I didn’t do anything in particular with them. They didn’t feel too important for me at the moment. 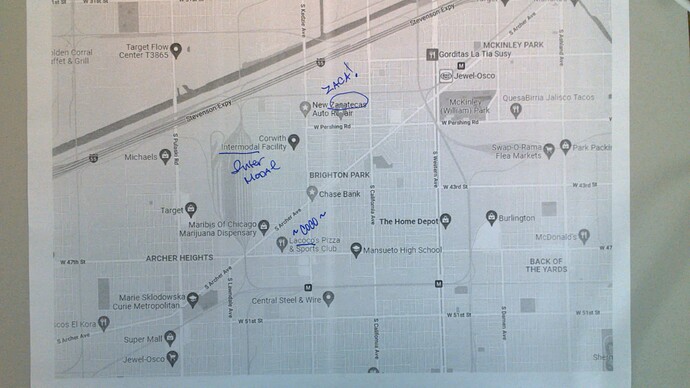 02 google map with some words1920×1080 154 KB
I thought about the funny shapes the streets offered up, but that didn’t feel like it meant anything, either. 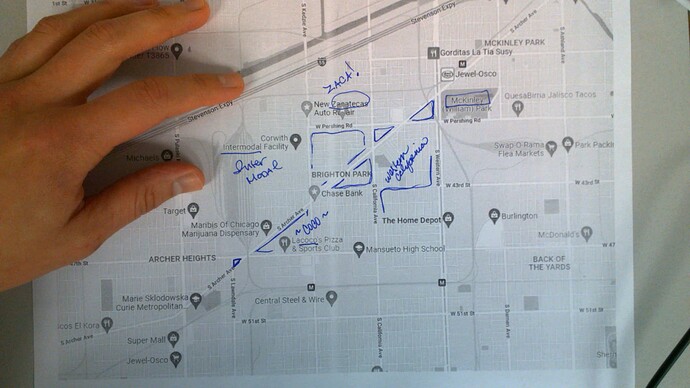 I looked around some more for maps, and found a good source for Chicago through the city’s GIS service.

I had difficulty printing directly from the service, so I had to do a screen shot, copy and paste into Word, and print. You’ll notice it feels more like a blank canvas compared to the Google map. 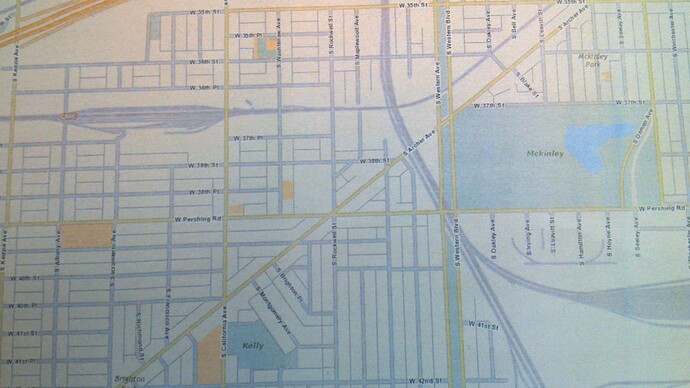 With more space on this map, I took some time to make observations. The main thoroughfares are gold, and the “wild west vibe” is noting the California-themed names, and I don’t know why that is. It’s the western part of the city for the time, so maybe that’s the connection. 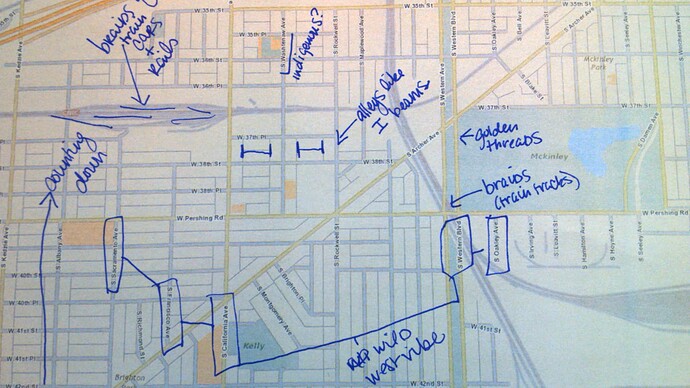 The large angled street is Archer Avenue, so I was surprised I hadn’t thought about a giant arrow yet. 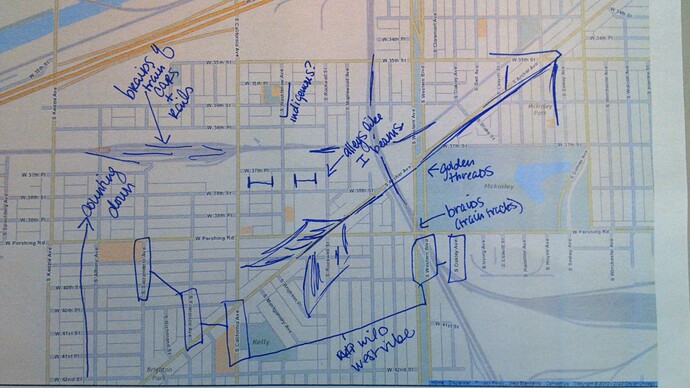 I combined some of the elements, the arrow, the feel of westward movement. But it felt really impersonal. 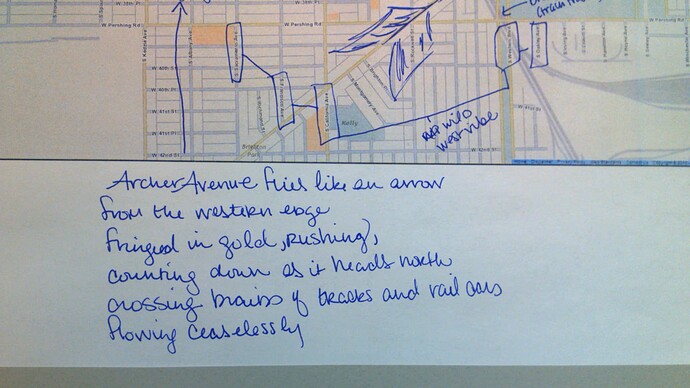 I thought it would be important to ask questions about a location that someone would center for poetry. Questions like, why here, what are your strongest impressions? what have you eaten? what sounds do you hear? The questions yielded some concrete details. 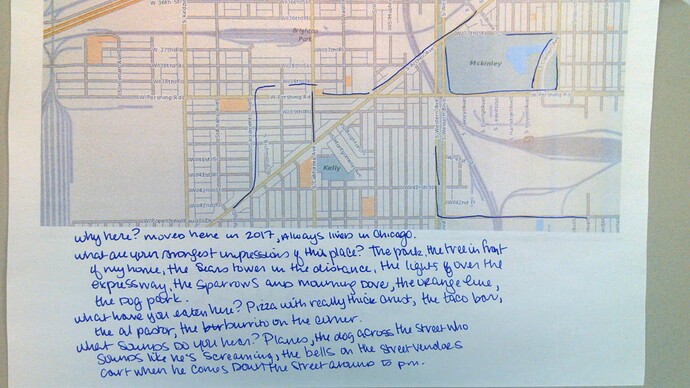 I then wondered about what I don’t know about the area, as well as what have I learned since moving to the area. 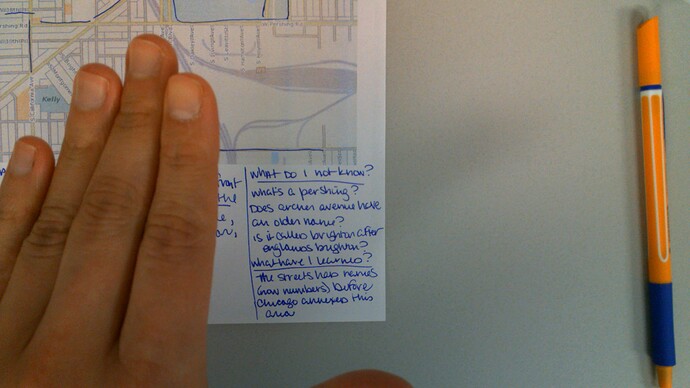 But wouldn’t it be difficult to prepare an area for people who might be from all across the city? Considering that, I think drawing a map (a little like a user journey in some ways) makes more sense because people could omit things they don’t use much (side streets) or emphasize memories. And as they draw and fill in place names, they could then take a moment and decide, What do I not know that I want to know? So, I knew Washtenaw had to be a native place name, but never looked it up. I think from the drawn map, I would then create a new poem, which I have not done, but would do next. 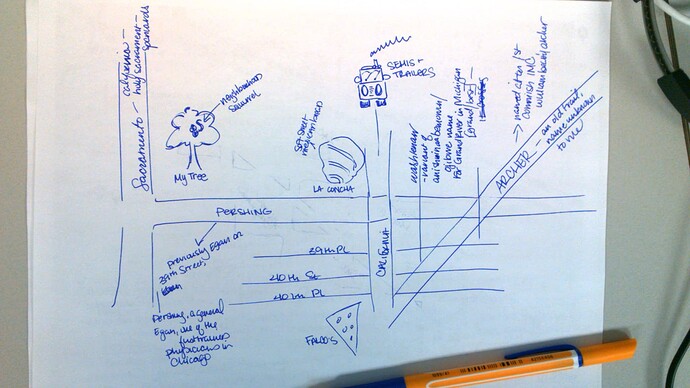 So that’s my cursory practice for working out how I could do this virtually with my audience. More to come!

Fantastic, @SashaN!
I love seeing all the steps of your process. I can’t wait to see what you do next!

Also, wanted to let you know about some options for map sources besides Google that you can try, and navigating these resources can be part of the “learning goals” of the workshop you’re planning for adults:

Open Street Map supposedly has a way to download and turn off layers, but the one time I tried it was rough-going. The data there is used in Open Street Map Haiku—you can see they have a pretty simple map grayed behind the text. Similarly challenging to use sometimes is the ArcGIS Map Viewer for topology.

There’s a different version of Google Maps that is called My Maps. It may give you more flexibility in what info is shown.

We listed these and others in the PLIX Spatial Poetry mapping resources list G doc. Please add others to this list!

@binka back when I was in library school, I had the good sense to take a government documents class, which is what inspired me to poke around state department of transportation websites today. It looks like Illinois DOT uses Open Street Maps in some form, and the print is a lot cleaner. [edited to add: woops! reviewing your Google document of resources, ArcGIS is probably perfect for any location.] 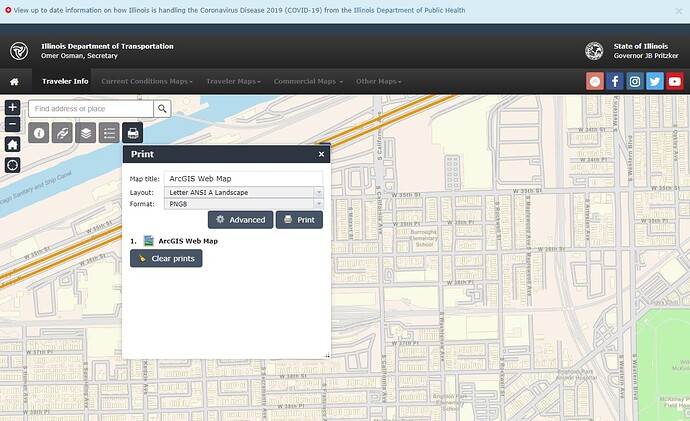 11 idot1322×808 129 KB
With urban or densely populated areas, I’m concerned participants won’t be able to study their own neighborhoods, however, there must be some way to tailor this either by branch or program (if the library program is paying close attention to a particular time and place).

For an adult audience, I think there could be a few discussion questions people can pursue later if they are interested, and that is, who makes maps, and how does the map maker influence the map? Since we have seen here there are variations in maps. The IDOT website has variations for weather and construction, because that’s their job. And Google promotes businesses because advertising is aligned with their user’s business goals (the business owners, not the people asking for directions, although they are not exclusive).

This is the ArcGIS Web Map I specifed for print in the prior screen capture. 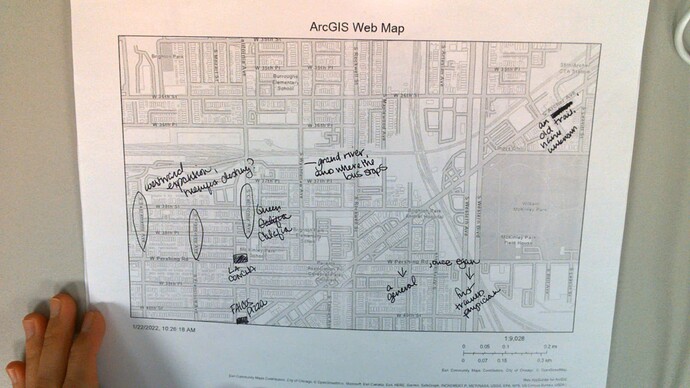 This is using the same map, but instead I am right-clicking and selecting Print, and it came out okay, it just wasn’t the area I was focusing on. 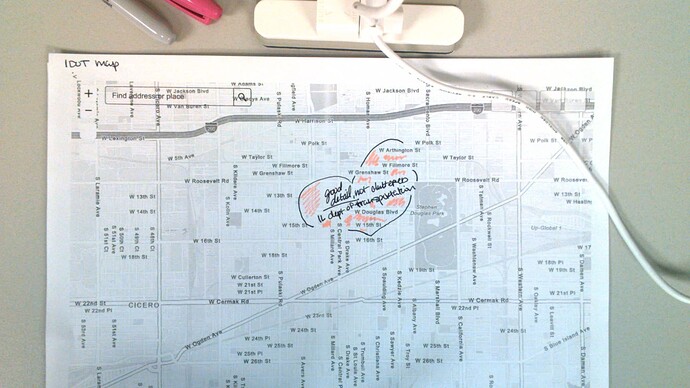 This is a print from Open Streets Map of the loop and it feels very busy. Maybe if I remembered to print it in grayscale it would be neater. I should have noted which layers I employed. Oops! Less than specific documenting. 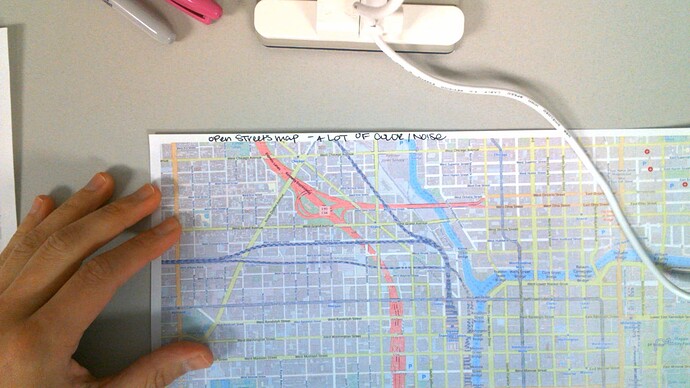 12 open street map print1920×1080 198 KB
On a fresh sheet of paper, I made some new notes, or combination of notes from earlier observations. I was most excited to finally learn what Washtenaw means – the Grand River in Michigan was called Washtenaw, so my sense is something like Rio Grande, or Mighty River. Washtenaw doesn’t meet the South Branch of the Chicago River, which runs parallel to the mighty I-55, also known as the Stevenson, ye clogged traffic artery during rush hour. I cut up my lines and rearranged them. David Bowie did something like this for some of his songs, but probably even shorter phrases. 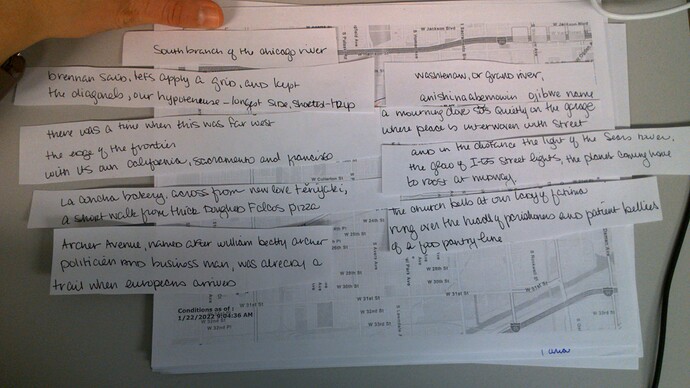 Typed out, and with a post-photo rearranging of the first line, I came up with:

Mapping Brighton Park
Brennan said, let’s apply a grid, and kept the
diagonals, our hypotenuse, longest side, shortest trip.
There was a time when this was far west, the edge of the frontier
with its own California, Sacramento and Francisco.
La Concha Bakery, across from New Love Teriyaki,
a short walk from thick doughed Falco’s pizza.
Archer Avenue, named after William Beatty Archer,
politician and business man, was already a trail when Europeans arrived.
Washtenaw, or grand river, Anishinaabemowin Ojibwe name.
A mourning dove sits quietly on the garage where Place is interwoven with Street.
And in the distance the light of the Sears tower, the glow of I-55 street lights,
the planes coming home to roost at Midway.
The church bells at Our Lady of Fatima ring over the heads of parishioners
and patient bellies of a food pantry line
near the South branch of the Chicago river.

Here’s a draft of what I could do with patrons in our summer program that is still under wraps :D.

We’re going to create a vignette, which is a short and descriptive piece of writing, using a map, these supplies, and a photo. You can use as much or as little of the supplies as you want.

We have a number of maps we printed from the internet. I went on a road trip in 2004, before smart phones, and at that time we had road atlases. They were enormous! And when you’re on the road, you can stop at a rest stop and get a folding map of your state, but you’ll only see highways, you won’t see the neighborhood streets. Maps can look different depending on their purpose.

Let’s start with this map labeled Early Chicago. When Chicago was incorporated, it only included this area. Everything else we know as Chicago was another community that Chicago eventually annexed. When they talk about the Chicago fire, this is the area they’re talking about (fact check).

[check for observations] Does anything on this map stand out to you?

Is there anything on the map that makes you curious?

Now we’ll select another map. It can be a neighborhood you know well, or one you have never visited, it’s up to you. We’ve also included a few historical park photos. The library has a lot of archival photos and information, so while we are looking back, feel free to also think about looking forward. Maybe you’re communicating to the future about what life is like today, or maybe you’re envisioning what Chicago could look like in the future. What are the sights, sounds, and smells? What does it feel like?

I’m planning to use Snazzy Maps (Snazzy Maps - Free Styles for Google Maps) to create my map. These maps will then go out in National Poetry Month kits as an activity.

PS: Snazzy Maps is also useful if you want to do laser engraved maps!

@SashaN - you can geolocate very precisely; for example, the image below is centered on a community center in my area. 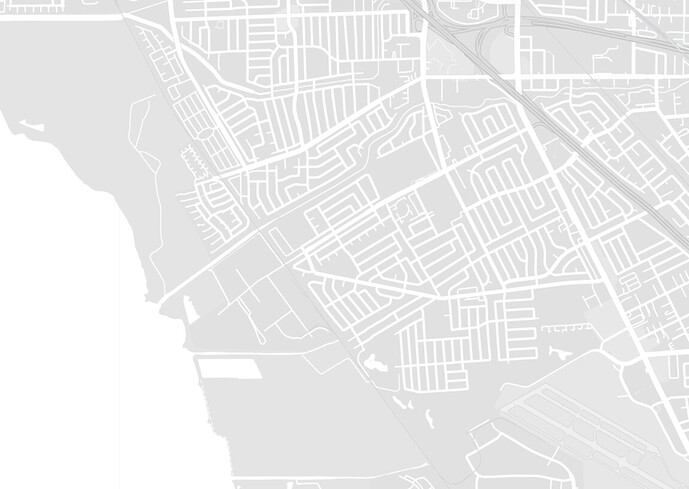 Oh, this is VERY exciting, thanks for sharing!

I came across a new to me resource that I will definitely add to my tool kit for this exercise:
Mapping Chicagou/Chicago - Settler Colonial City Project
On the right hand side at the bottom of the page is the link to the document with different maps and some context and events on a timeline. I usually check out the Architecture Biennials, but completely missed this in 2019.

The Settler Colonial City Project feels like one outcome of many if you spend enough time with a map.

Update: I’m working on the kit still, and planning to do three live programs that people can join. I came across a map in an article from our local public radio station and contacted the museum who maintains the map. They normally charge a fee for the reproduction, but when I explained, they were able to waive it. So now I have a map drawn in 1900 with “Indian Trails and Villages of Chicago (and beyond) 1804” (map drawn 100 years later, so not sure how accurate it is).

I did discover that according to the map, the area I was born and raised looked to be a large Native settlement. It is where the steel mills were in the 1900s. It feels shockingly the same as the area continues to fight environmental racism. I would never have investigated this or put the pieces together without this project.

I’ll update the final kit contents once I get there. I’m thinking of including a list of Native words that would be familiar if you live in the area, like Skokie and Muskeg…marsh and swamp lol.

I am preparing to offer Spatial Symmetry virtually at the Cambridge Public Library (Cambridge, MA) in partnership with Cambridge GIS. This will be the first time I am partnering with another department to offer PLIX programming and am excited about their contribution! I am hoping to empower our patrons to use GIS’s map collections and data and help them discover more about Cambridge and its history.

What a great idea! I bet Cambridge GIS will get a lot out of meeting with patrons and hearing/seeing their questions and interests. We have a few universities in the area and you’re making me think it would also be a good topic to collaborate with them on. Have fun!