In doing some research about the development of–and research in–the field of inflatables, especially in the Media Lab, I’ve come across a bunch of cool projects that I thought would be great to share with you all!

Many of these projects (all of which come from the Tangible Media group) could serve as inspirations for remixes of the PLIX Inflatables activity, especially in the context of maker spaces.

(1) Therms-Up: The first highlight comes from a recent publication fron Kyung Yun Choi, the PhD student with whom we co-designed this new activity! Yun’s paper provides some technical details on how up-cycled materials, and in particular thermoplastic bags, can be used to create interactive materials/interfaces. Handily, she includes temperature settings for melting different materials if using a standard clothing iron, indicating that a lot of the advanced designs might be achievable using what tools folks happen to have on-hand.

Yun also demonstrates an interesting use-case in which she uses retort food packaging/inflatables to create conformable sensors: one for measuring shape deformation and another for measuring touch. Personally, I am interested to see if there are micro:bit extensions (using MakeCode) that could be incorporated for inflatables-based sensing!

For those who have a 3D printer at their library, the paper also documents a method for ‘printing’ inflatables with complex patterns, making it possible to heat, or rather seal, with increased precision (thus allowing for more sophisticated designs–e.g., of microfluidic-like channels or devilishly ornate origami structures). We have some librarians tinkering with this method currently, and so we hope to share-out some documentation for this process/remix soon!

(2) Print-flatables: this project (full text here) follows a similar approach to that taken in Therms-Up. There are a few major differences, though: 1) the scale is intended for human-sized artifacts, like furniture or protective airbags; 2) the method of creation involves a customized, CNC-enabled platform (and begins with a computer-rendered 3D file); 3) the material used is a thermoplastic fabric, rather than mylar. What I love most about this work is the range of geometries that are achievable by manipulating the fabric through various types of folds. Some of this might be possible to create using the up-cycled materials used for PLIX inflatables, especially the ‘mountain fold’ method to achieve discrete angular conformations. (Also, anyone up for making some furniture out of chip bags? 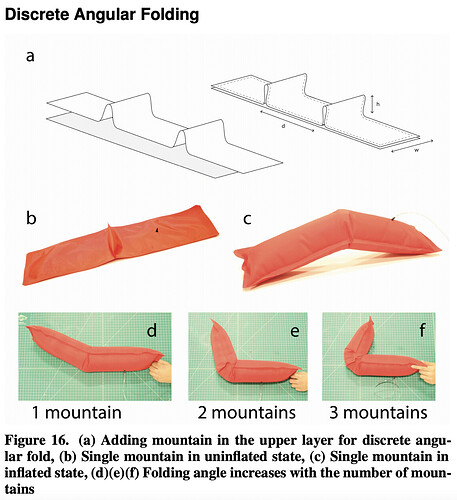 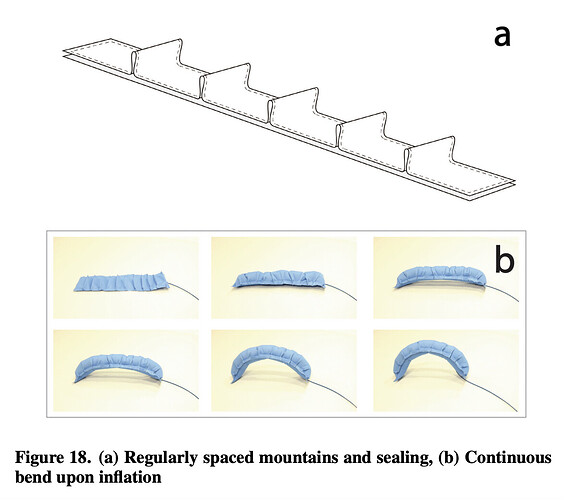 (Here was my first attempt at creating a mountain fold pattern using a recycled snack bag:)

The researchers were able to create a crawling inflatable through combining various components made of mountain folds!

(3) Both Therms-up and Print-flatables were preceded by Aeromorph (publication here), which was the proof-of-principle for using customized software for generating shapes that bend out of various materials. The paper I’ve linked to has a series of helpful images that show how different heat-sealing patterns can result in different material behavior. Here’s one example examining the bending caused by diamond seals of various sizes: 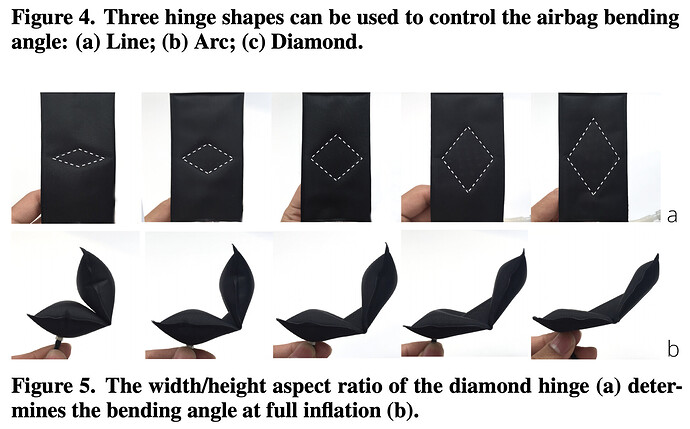 I’m also interested in testing out this method of curling created by a series of diamonds along a single piece of material:

(4) Auto-inflatables: This project (see publication) relies on exothermic chemical reactions to create motion, rather than mechanical inflation! The non-mechanical, “pop-up” inflation (or activation) of these materials is caused by an interaction of chemicals contained by the inflatables that produce carbon dioxide gas, and was demonstrated to be effective across a wide range of materials (including mylar, nylon, and polyurethane). Rather than show images, I high suggest checking out this video to see auto-inflatables in action!

Chemical reactions that produce CO2 are relatively safe and can certainly be tested out at home! I’m looking forward to trying to produce by own auto-inflatables using baking soda and vinegar

This is just a sample of ongoing inflatables research out there! If you come across any projects that excite you in the field, feel free to share them here! I hope the work outlined here provides some sparks that inspire you to take the PLIX inflatables activity to new heights!

It is interesting how inflatables are used to assist physicians in the medical industry or to assist an individual after an injury to a limb.

https://images.journals.lww.com/anesthesia-analgesia/ArticleViewerPreview@2.00000539-200705000-00077.F1-77.jpeg)
Source
In this figure, a physical therapist is using AI and sensing technology to tune this exosuit! That is pretty nifty!

The auto-inflatables idea reminded me of a maker program I ran a couple of years ago with 7th & 8th graders making bath bombs. We used baking soda & citric acid (both are nontoxic). It was probably the most fun, albeit the messiest, time we’ve ever had in our library’s meeting room!

Thinking of an inflatables + art application, I’m imagining using a clear snack bag that would allow you to see some swirling colors created by water & food coloring coming into contact with baking soda-citric acid mixture (and probably some glitter!), like what you see when you drop a bath bomb into the tub.

Maybe couple that with the repeated diamond fold that Avery posted above to make a spiral shape.

Continuing this deep dive with a recent presentation about up-cycled inflatables by Yun, the MIT researcher we partnered with for developing this PLIX activity!

This helpful inflatables research emerges from work led by Xuanhe Zhao, professor of mechanical engineering and of civil and environmental engineering at MIT. 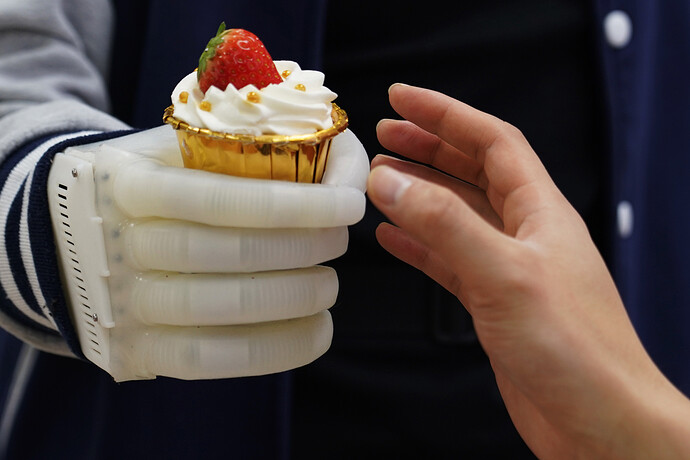 An MIT-developed inflatable robotic hand gives amputees real-time tactile control. The smart hand is soft and elastic, weighs about half a pound, and costs a fraction of comparable prosthetics.