Since I’m not very circuit-oriented, I actually handed all the circuit things to a colleague of mine and asked if he could come up with anything interesting for a Take-and-Make kit. Well, he took on the challenge and has been having fun with it, but we’ve hit an interesting stumbling block and was wondering if one of you might have some better ideas than we did!

My colleague has been trying to combine origami with paper circuits, and he found a really neat way to make an origami tree that turned out super cute (photo below). Our initial idea, to keep things kind of simple, was to have four LED lights in the bottom ring of the tree in each corner. However, we’re a little concerned with whether or not we’ll be able to get the paper circuit to connect properly to all four folds and how to build it.

We’ll be experimenting with it more next week, but I figured I’d reach out and see if anyone has any creative solutions or any ideas of what we should try before we dive in! 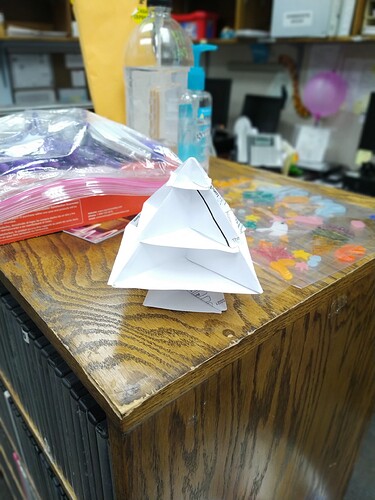 Seems like a really cool project. The paper circuits can be tricky. Is it possible to use more than one battery to create more than one circuit? Or is that too heavy…

Hmm, I hadn’t thought of that! We were trying to do it with one battery. I think it would be able to support the weight of two. It’s pretty sturdy, and we found that the batteries tuck really nicely into the corner folds on the bottom one and almost support themselves (we didn’t tape them in when testing things, even though we obviously would want to for a finished project).

Thanks so much for the suggestion! We’ll definitely have to give that a try tomorrow and see if that works out better.

I have had success with making connections. A couple of notes.

So with those notes I found it easier to fold the origami and then Highlight/color/Mark each of the sides so that I knew where it ended up after the folding so I could then lay out my circuits. Then unfold it put down the metal tape and then fold it back together.

The biggest issue is figuring out were to make all the connections without crossing your positive and negative lines. That’s when it becomes 3d tetris.

Brainstorm Idea A.K.A crazy idea.
You could cut the top off the base tree and then use that as a location for the battery allowing for a better connection with the upper and lower portions of the tree and hiding the battery.

I also found this program/website that I thought was interesting it does all the folding for you. So it allows you to make patterns using an .svg file. At the very least its a cool concept/program to play around with. https://origamisimulator.org/

Ooh thanks. I was looking for something like that. I had followed a link in an article from the School Library Journal but it was no longer functional. Hoping to do some origami in the coming month. Found a fun book on holiday origami for kids.

Sorry I’m late to respond! I saw your message earlier, though, and we’ve been playing with this link and think it’s wonderful. Thank you so much for sharing it!

I absolutely love your idea for the fortune teller (and I bet that’s super popular with kids). Hadn’t thought about using the top of the tree like that, either, but I think that’s a great idea. I’ve passed all of this to my colleague, and I’m just waiting to see what he comes up with. Thanks for the help!